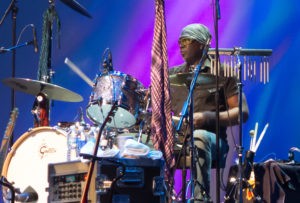 Chicago native, Alvino began playing drums at the age of 10 with the William Penn Elementary School drum and bugle corps. Soon after, he was keeping rhythm for various local bands, and by the age of 14 Bennett began traveling the country, working the club circuit. At 17, he was spotted, approached and asked to play with blues legend KoKo Taylor. Around the same time, Bennett had opportunities to play with many other blues and R&B luminaries like Willie Dixon, Muddy Waters, Cash McCall, and Mighty Joe Young, just to name a few.

In 1974, Bennett was asked to tour with the late great songstress, Minnie Riperton. Touring with Riperton opened the doors for many other projects, including working with Gong Show Guest, Jaye P. Morgan and Motown’s best kept secret, The Originals. In addition, Alvino also worked with the The Sylvers and recorded with other leading Motown artists.

When not on tour, Bennett writes and produces his own music and also works with other artists. Alvino is currently teaching at Pulse Drumming, School of Drums and Percussion in Ventura, CA.