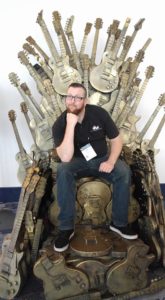 Mike Beers, Performing Artist in Residence, currently engaged in Professional Development in California Core Curriculum compliance through Pulse Drumming, School of Drums and Percussion. Michael Beers is a multi-instrumentalist who has been studying drums and guitar since 1995 and performing professionally since 2004. Michael began his music career in elementary school as a trombone player but shortly thereafter, he moved to his passion, drums. Michael is a very active performer of the drums and guitar in the music scene in Ventura, California from hosting the award winning Beers Brothers Open Mic Night, to performing with multiple bands including the award winning The Seaside Band.

Michael continues to study and grow in music every day.