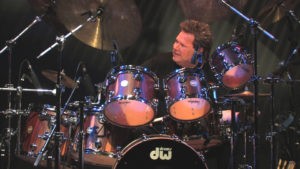 RICK LATHAM is known as one of the music industry’s most in demand studio and touring drummers today, an exciting solo artist, acclaimed composer, globally renowned author and drumming guru.  At just 25 years of age, it was the success of his ground breaking drum text, Advanced Funk Studies, that launched him into the international percussion spotlight, but is has been his expertise as a versatile performer that has made him one of contemporary drummings’ most respected players.  Originally from Columbia, South Carolina, Rick relocated to Los Angeles in the mid 80’s, and now splits his time between L.A. and Milano, Italy.  For the past twelve years, he has been the touring drummer with Grammy Award winning artist JUICE NEWTON, as well as the founder and driving force of his own All-Star jazz “super-group RICK LATHAM AND THE GROOVE DOCTORS and “LATHAM – ROBIN – SORATO”.  He was a featured member of THE EDGAR WINTER BAND for nearly a decade with hundreds of stellar performances, including a very special appearance at the 1999 Montreux Jazz Festival.

While living in Dallas, before moving to LA, Latham was also a member of R&B bass legend CHUCK RAINEY’S band – “Rainey Man.” and also performed with such greats as bluesman  B. B. KING during this time.   Latham has enjoyed the opportunity of performing with a long list of other leading figures, including rockers, RICK DERRINGER,  NEAL SCHON and PAT TRAVERS, as well as jazz greats HOWARD ROBERTS, BILL WATROUS, JERRY COKER, DAVID SAMUELS and PAUL SMITH, to name a few.  His versatility has also been highlighted on the theme for television’s “9 to 5” series, “Fame,” the QUINCY JONES produced soundtrack, “Fast Forward” and more recently the DVD release of “Gone in 60 Seconds”,  “Daredevil”  and “Spiderman”.  As a composer, his music has been featured in network television, feature films and product jingles.  Shortly after relocating to Los Angeles, he also released his second successful book Contemporary Drumset Techniques and soon afterwards the instructional videos that parallel these works.  2005 brought the release of his highly anticipated 25th Anniversary DVD, which also became an immediate hit. His latest solo release is his best selling DVD  package, entitled “All About The Groove”.  Rick has toured extensively throughout the U.S., Canada, South America, Europe and Asia and is frequently invited as a featured performer to leading jazz festivals, drum festivals and percussion related events around the world.

In a recent feature interview, Modern Drummer Magazine refers to Latham as “a man who many consider to be one of the best clinicians on the planet”.  The magazine also names his Advanced Funk Studies among “The 25 Greatest Drum Books Ever Published.”.

Rick started drumming at the age of twelve.  Initially self-taught, his ears led him to such powerful rhythm and blues influences of Southern Gospel music and the hit Motown and Atlantic label recording artists of the day.  Playing club dates during his high school years throughout the Carolinas and Eastern seaboard, Rick attended to the technical aspects of drumming, but his primary focus was always playing the “groove.”  Later, while earning a Bachelor of Arts degree in Percussion Performance at East Carolina University, he expanded his rhythmic and percussion related vocabulary, studying snare drum, mallets and timpani with Harold Jones. He was the winner of the school’s Young Artist Concerto Award, performing the Milhaud Concerto for Batterie and Petit Orchestra with the school’s orchestra.  In 1977, Latham was granted a prestigious teaching assistantship at North Texas State University, where he taught mallets and snare, while pursuing his Masters Degree in Percussion with Robert Schietroma and Ron Fink, and studying drumset with Jim Hall.  While at NTSU, Rick was also a featured soloist, performing with this school’s Wind Ensemble, Percussion Ensemble, Symphony Orchestra and the legendary North Texas Lab Bands, as well as instructing the NTSU drum line.  Since relocating to L.A. his career has remained at a whirlwind pace with only more great things on the horizon for this  “Doctor of Groove”.

In addition to maintaining a full playing and touring schedule, doing sessions, presenting master-classes and private teaching, when time permits, Rick also enjoys producing, composing and writing and fuels his passion for music and performing arts education through his involvement in the evolution of new music and media technology.