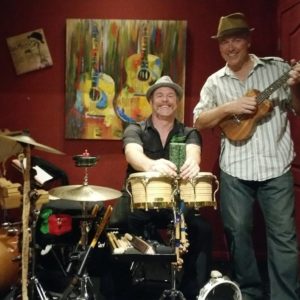 Trey has enjoyed a musically oriented life since early childhood beginning with keyboards at age 4. His percussion education has been widely varied with influences from all around the world. His resume reflects 30+ years as a professional performer and 20+ years as a professional instructor.  In 2005 he became co-owner of Pulse Drumming MusicWorks in Ventura, CA and has been since then alongside business partner/founder Kim Brower.

Currently he studies pedagogy and music education with Larry Stein while enjoying performing alongside him in his tropical island inspired band ‘The CocoKnots’ , as well as Pulse’s professional percussion ensemble with members of both the Repercussion Unit and Hands On’Semble. Trey also enjoys working with his own jazz combo which includes some of Ventura’s best jazz musicians including members of Ventura’s world renown Big Bad Voodoo Daddy. However, his true passion is in teaching, inspiring and passing along what he has learned to the new era of aspiring musicians.

He currently serves on the Percussive Arts Society Drumset Committee and has been a proud member of PAS for 20 years as of 2017.